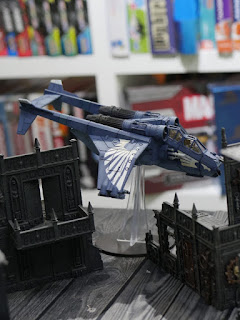 Commander Graft dusts off his red beret as he disembarks from the Hummingbird. Few medics rush into the Valkyrie, avoiding the stoic commander to attend the wounded scions who will not be seeing action anytime soon. Pilot Lt.Comm Keyleigh salutes Graft as he passes by the cockpit and returns it with a nod, probably the only compliment that can ever come from the Lion’s commander. Her aim was good today and with many of the hellstrike missiles found their mark and took down 2 ravenwing land speeders. Graft makes a mental note to raise a commendation to the Master of The Fleet on her performance today. 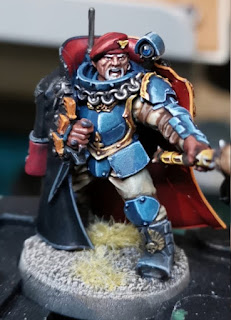 If only the rest of the Tempestus squad was half as competent as the young pilot, the losses and the humiliation would have been bearable.

But even that was nothing compared to the local Tenebris forces that was totally decimated by the Ravenwing company. 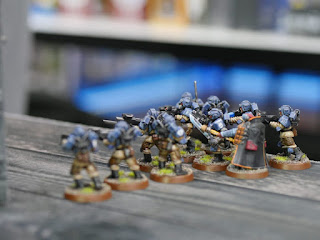 Graft’s direct instruction to the local Tank Commander was totally ignored as the presence of the Ravenwing company surprised the local ragtag militia, what’s left of the planetary defense forces. Colonel Zrack paid with his life for his impatience along with the rest of his men as they were quickly cut down by the Astartes, but not before the last standing trooper kept the homing beacon alive for Graft’s fleet to arrive (getting to the LZ took longer than usual as navigation and avionics were still affected by residues of the storm). By the time they arrived, it was already too late and friendly fire confusion between forces of the Imperium of Man continued, resulting in 2 more scion squads cut down by chainsword and bolter fire, whilst an ATV and another Ravenwing bike squad lost to melta and plasma firing squad. If it wasn’t for the Valkyries’ ordnance in slowing down their advancement, it could have been worse for the Tempestus. 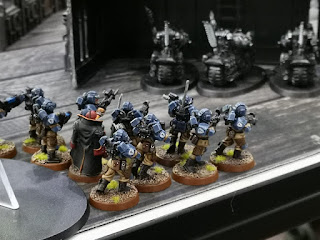 The Tempestus Prime does not feel guilty being the only man came back in one piece from this fiasco of a mission. Dying honorably for the Emperor is commendable, but staying alive and learning something new to get closer to victory is a better way to serve the Imperium.

A communication officer intercepts Graft  in the corridors of Imperium Navy base on the surface of the planet. Graft reads through the transcripts which perhaps contains the only good news for the day. Cypra’s Talon, a Lunar-Class Cruiser, is making its way to the Denet system in a matter of days with enough reinforcement and support to make a difference.

At the end of the transcript, he looks up to the young corporal, “So, he’s coming after all” 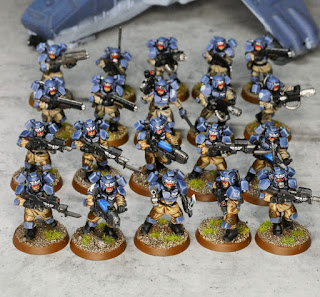